In today’s article, I put Life Ionizer MXL-15 up against the Tyent UCE-11 to see which comes out the victor. I’ll tell you right now that these are two of the best home water ionizers money can buy, and in the end, it’ll be up to you to decide which ionizer gives you the most bang for your buck.

While performing my Life MXL-15 review, I was amazed by some of its features. It’s certainly one of the most powerful alkaline water machines in the world.

Previously, I ranked the Tyent UCE-11 as my #1 best water ionizer. Let’s see if it deserves the crown once again or has Life produced a superior unit?

Where are TyentUSA Water Ionizers made?

Tyent produces and assembles its ionizers in an ISO-approved factory in Korea. ISO (International Organization for Standardization) is an internationally recognized authority for best manufacturing practices and quality assurance. In fact, I once had to take an ISO course way back when during my days working as a construction manager in the curtain wall industry.

Tyent stresses that people should not trust brands that produce ionizers in China and Taiwan.

Tyent also guarantees that each of its units is tested by hand before being shipped from Korea to the United States.

Overall, I appreciate the transparency on their website. They’ve been in business for over 15 years.

They also provide a page dedicated to their certifications including certs from the GMP, BBB, and KFDA.

Where are Life Ionizers made?

Similar to Tyent, Life Ionizers designs its alkaline water machines in the USA and manufactures them in South Korea.

According to their website, they import several components from Japan and USA.

Life writes the reason consumers should only trust ionizers manufactured in Korea or Japan is that both countries have certification programs that ensure the ionizers are medical grade.

Life has been in business for 21 years, slightly longer than Tyent.

Overall, I think both Tyent and Life are producing superior quality ionizers in top-notch facilities.

I like to see the long list of certifications both companies offer with the medical-grade tag from the KFDA. That tells me I’m buying a top-of-the-line product from either company. As you can see, these two machines tie in most categories, and in my opinion, it’s no coincidence.

These two companies are fighting head to head for that top spot in the water ionizer industry.

The MXL-15 does have more platinum-coated titanium plates than the UCE-11, yet the UCE-11 produces water with a slightly higher negative ORP, which is the measure of antioxidant potential.

In my opinion, a faster flow rate doesn’t necessarily make the MXL-15 a superior machine, but if you need to fill a large water jug in a hurry, the MXL-15 is the winner.

Both the MXL-15 and UCE-11 come in under-counter versions with attractive digital displays above your sink.

Personally, I like the cell-phone-inspired display of the Tyent more.

There is a growing demand for added molecular hydrogen in alkaline water for its additional health benefits.

Both the MXL-15 and Tyent UCE-11 boost molecular hydrogen, however, the MXL-15 does it automatically while the UCE-11 gives you a “Hydrogen Boost” option.

It’s up to whether you want the option to boost the hydrogen or if it’s not important to you. 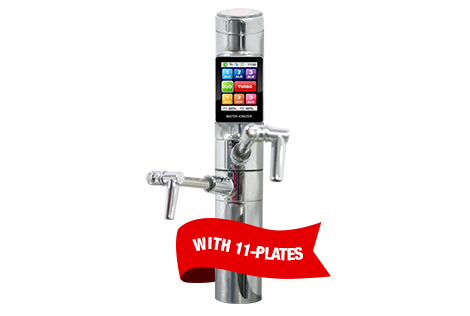 At the time of this writing, the MXL-15 costs more than the UCE-11. Do you think it’s worth the extra money?

Now, let’s take a look at a visual representation of each machine to give you an idea of what each would like in your kitchen.

Life Ionizers currently has a solid score at Trust Pilot.

There’s no doubt in my mind that both companies produce superior products with the certifications to back up the quality of their ionizers.

I like that they both manufacture their ionizers in Korea, where they’re able to get a medical-grade certification for their water machines.

When purchasing a water ionizer, it’s critical to be sure you’re buying legit platinum-coated titanium plates that will last you a lifetime.

Both companies back up their water ionizers with a lifetime warranty, and they both have excellent customer service track records.

In the battle of Tyent UCE-11 vs Life Ionizer MXL-15, I give a slight nod to Tyent.

However, I do think the MXL-15 is the more powerful machine. It’s the most powerful home water ionizer I’ve seen on the market today.

I prefer the smartphone-inspired display on the Tyent UCE-11, and I think Life will eventually update theirs to match Tyent’s quality. Tyent UCE-11 Turbo Review • Is It Better Than Kangen?